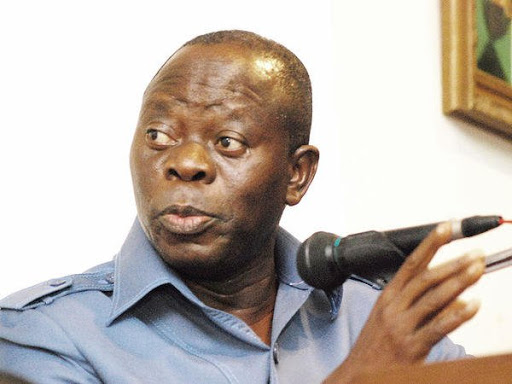 A Federal Capital Territory (FCT) High Court in Jabi on Wednesday ordered the suspension of the National Chairman of the All Progressive Congress (APC), Adams Oshiomhole, pending the determination of a substantive suit.

The judge, Danlami Senchi, gave the order following an application of interlocutory injunction asking the court to suspend Mr Oshiomhole, having been suspended as a member of the APC by the party in Edo State.

The application was filed by an applicant, Oluwale Afolabi.

While Mr Oshiomhole is the first respondent, the APC is the second respondent.

Mr Afolabi in his application dated and filed on January 16 had contended that Mr Oshiomhole is currently suspended by the party and has not challenged the suspension.

According to Mr Afolabi, Mr Oshiomhole’s rights as an APC member is currently abated and he cannot continue to act as chairman of the party.

He argued that Mr Oshiomhole cannot continue to enjoy benefits from the APC, despite his suspension as a member of the party.

A Senior Advocate of Nigeria, Damian Dodo, is the lawyer representing Mr Oshiomhole and the APC.

In his ruling on Wednesday, Justice Senchi held that the first and second respondents wrongfully kept Mr Oshiomhole as the national chairman of the party.

The court also ordered that Mr Oshiomole should stop parading himself as the chairman of the APC.

The court has also given the APC orders not to grant Mr Oshiomhole access to the party secretariat.

The former Edo State governor and the APC national leadership, however, discountenanced the suspension, saying it was invalid. They said only the party headquarters could suspend national officers of the party including the chairman.

Mr Oshiomhole is having a crisis with his successor in Edo and fellow party member, Governor Godwin Obaseki.

Declare August 9 public holiday or we’ll ask Allah to punish you – Islamic group to Buhari, others

Sanwo-Olu felicitates with Hamzat at 56

BREAKING: We’ve identified those who had contact with coronavirus patient, says Larfarge