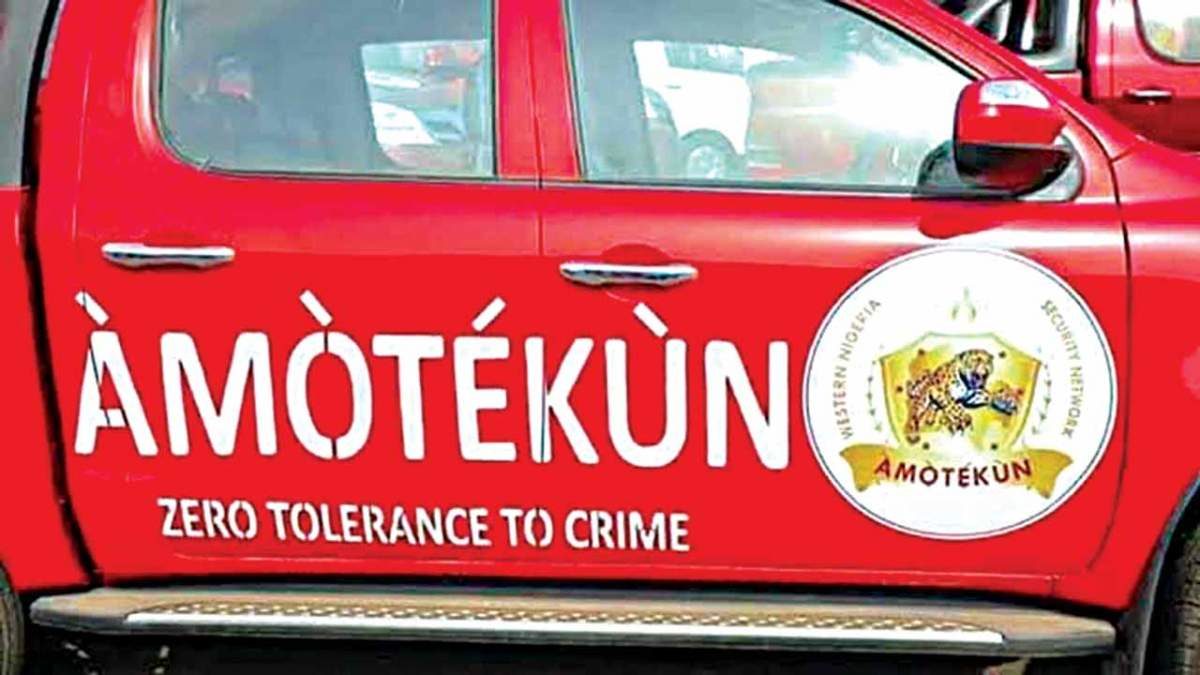 James Sowole in Akure and Yinka Kolawole in Osogbo

With Lagos, Osun, Ogun, Ondo and Oyo States Houses of Assembly passing the South-west Security Network (Amotekun) Bill into law, the region is now set to consummate the process of enhancing the security of lives and property of its indigenes.

The amendment bill had successfully gone through all the different stages of law making, which include first and second reading, public hearing, laying and presentation of committees report, adoption of report by House, third reading and finally passage.

In Oyo, the members of the state House of Assembly, who were dressed in leopard skin regalia, yesterday passed the Oyo State Security Network Agency Bill, 2020, codenamed Operation Amotekun.
The session started with a clause-by-clause consideration of the bill before its eventual third reading and final adoption and passage.
Some of the lawmakers wore amulets and arm bands demonstrating their combat readiness.

The lawmakers added a drama to the session when all of them growled like leopards the moment the Speaker, Hon. Adebo Ogundoyin, hit the gavel passing the bill into law.
Local hunters’ chants and songs immediately rent the air, with the lawmakers congratulating one another.

The Ondo State House of Assembly also passed into a law a bill for the establishment of the State Security Network Agency and Amotekun Corps.
The House had on February 18, deliberated on the bill and committed it to the House Committee on Security Matters after scaling through first and second reading. The legislature on February 24 had its public hearing on the bill.

The bill was finally passed sequel to a motion moved by Hon Jamiu Maito, for the bill to be submitted by Chairman House Committee on Security Matter, Hon. Ololade Begudu. The motion was seconded by Hon. Favour Tomowemo representing Ilaje.
The Clerk of the House, Mr Bode Adeyelu, read the bill for third reading and Maito moved the motion for its passage while it was seconded by Hon. Leonard Akinribido, the Deputy Minority Leader.

Speaking on the recommendations of the bill, Begudu said that the security agency would have a board to be administered by a chairman and be appointed by the state governor.
He added that the chairman must be a person of proven integrity and that there would a commander to supervise the personnel of the corps on field.
The committee chairman noted that the commander must be a retired security personnel not below the rank of major or its equivalent and being subjected to confirmation of the House of Assembly.
According to him, the template of the state was used by others to harmonise the bill.

The Speaker of the Assembly, Hon. Bamidele Oleyelogun, described the passage of the bill as remarkable in the state.
Oleyelogun, who wore a traditional attire crested with Amotekun, said the bill, if assented to by the state governor, would birth the security outfit, which will reduce criminalities in the state.

He explained that the corps would be a community policing body that would complement the work of other security agencies in the state.
Oloyelogun warned criminals to move away from the state, saying that Amotekun has come to stay.
The state Commissioner for Justice and the Attorney-General, Mr Kola Olawoye (SAN), said that history had been made in the state with the passage of the bill.
Olawoye noted that it was the first time that the Yoruba race would speak with one voice on an issue.

In Ogun State, the lawmakers passed a bill for a law to establish the Ogun State Security Network Agency and Amotekun Corps.
The Majority Leader, Hon. Yusuf Sherif, had presented the report of the Committee on Security and Strategy during plenary.

Sherif stated that the committee recommended that the bill be passed as approved by the Conference of Speakers of South-west Legislature.
The majority leader moved the motion for the adoption of the report and it was seconded by Hon. Musefiu Lamidi.
The motion was also supported by the whole House.

Sherif, thereafter, moved the motion for the third reading of the bill and this was seconded by Sola Adams.
The clerk of the assembly, Mr Deji Adeyemo, read the bill for the third time while the Speaker, Mr Olakunle Oluomo, ordered that a clean copy of the bill be forwarded to Governor Dapo Abiodun for his assent.

The News Agency of Nigeria (NAN) reported that the lawmakers had during the second reading of the bill on February 20 stated that the bill was to assist in maintaining law and order in the state.

They added that the Amotekun corps would be a community policing body that would complement the work of other security agencies in the state.
The lawmaker stated that Amotekun would curb criminal activities such as kidnapping, robbery, cultism, and terrorism.

The Osun State House of Assembly also passed the state Security Agency and Amotekun Corps Establishment Bill 2020 into law.
The bill was passed with some amendments and corrections.
The Speaker, Hon Timothy Owoeye, stated at plenary that the lawmakers had considered the grey areas pointed out during last week public hearing before the passage.

10 Productivity Tips To Help You Reach Your Goals