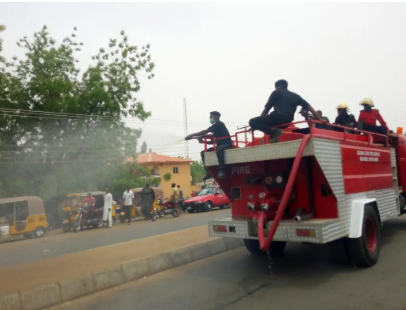 The Enugu State Government has commenced the fumigation of the metropolis and neighbouring environments in the state capital.

This is part of some precautionary steps taken by the state government to contain the spread of COVID-19 and to safeguard the lives of residents of the state.

According to the Chief Fire Officer, Okwudiri Ohaa, the state government will fumigate major markets in the state before they will be allowed to reopen for normal activities after the pandemic

Ohaa who maintained that the soluble substance for fumigation is not dangerous to health said the major streets and suburbs will be captured in the exercise.

“As you know, we started yesterday through Holy Ghost, ShopRite, Old Artisan, and later in the day Government House. Today, we are doing it at Okpara Square, bearing in mind that this is more of a gathering centre as there is always a multitude of people here.

“If not because of the lockdown of the state, you will see people jogging, exercising themselves. His is the centrepiece of the state’s social gathering. If there is anything being done by the state government or even Federal Government, or anything that will attract a crowd of 500 and above they will use Okpara Square.

“The state government is being proactive to make sure that coronavirus will not be a threat to the state. Tomorrow, we are moving to Obiagwu Council. Saturday, Sunday we may rest. Monday, we will go to Nsukka,” he stated.

He has also called on citizens to comply with the sit at home order and avoid public gatherings so to enable them carryout the assignment.

How to preserve fried rice (video)