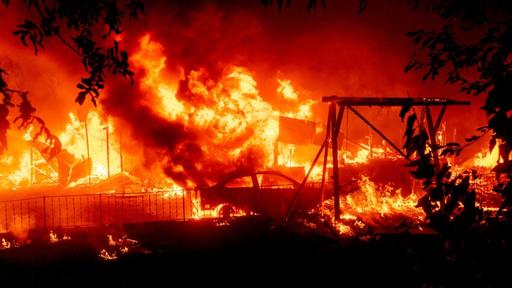 The U.S. state of Oregon was on Friday preparing for a high number of fatalities as wildfires that have burned over 1 million acres (400,000 hectares) continue raging, while dozens of people are missing.

Some 40,000 people have been forced to flee their homes.

The fires have also neared Portland, forcing a state of emergency in the area, and giving the city the worst air quality in the world, according to the the Swiss company IQAir.

“We are preparing for a mass fatality incident based on what we know and the numbers of structures that have been lost,” Andrew Phelps, director of the Oregon Office of Emergency Management said at a press briefing.

Fires in Oregon, California and Washington have burnt vast tracts of the western U.S. on Friday, killing at least 15 people and destroying thousands of structures.

In California, more than 14,800 firefighters are battling blazes across the state, including 28 major fires, which have burned a record 1.25 million hectares this year – an amount 26 times higher than the same period last year.

One of the most dangerous fires in California is the North Complex, north-east of San Francisco.

It has killed 10 people, with 16 people missing, and is raging at 23-per-cent containment, according to the Butte County Sheriff’s Department and state fire authorities.

Meanwhile, an evacuation warning has been issued for the town of Paradise in Butte County, where 85 people were killed in a 2018 wildfire.

Video shared in the Oregonian newspaper of Blue River, home to around 800 people, showed the town completely torched and enveloped in an orange hue on Thursday.

In Portland, Mayor Ted Wheeler issued a city emergency order on Thursday due to the extreme wildfire conditions threatening lives and property both in the city and in the Portland metropolitan area.

The dense smoke layer should suppress temperatures in the Pacific North-West, providing an advantage to firefighters battling the flames.

According to the California firefighting agency Cal Fire, six of the top 20 largest wildfires in California history have occurred in 2020.

“What we are experiencing right here is coming to a community all across the United States of America, unless we get our act together on climate change,” Newsom added.

The fires have been fuelled by a volatile mix of high winds, heat waves, lightning storms and drought conditions, which experts say are the symptoms of climate change.

On Friday Newsom also signed legislations making it easier for some California prisoners to become firefighters after they leave prison.

In California, prison labor has played a key role in the state’s battle of the blaze, with hundreds of incarcerated men and women working on the front lines of the blaze.

The prisoner program, which enlists prisoners for around 1 dollar an hour and reduces time on their sentences, has earned wide-spread criticism from human rights advocates.