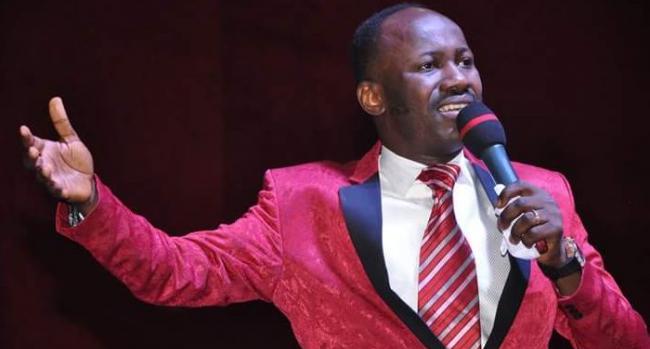 The founder and Senior Pastor of Omega Fire Ministries, Apostle Johnson Suleman, has reacted to the apology by radio personality, Daddy Freeze tendered to Bishop David Oyedepo, the founder of Living Faith Church.

Apostle Johnson Suleman in a series of tweets posted on his timeline on Sunday warned Daddy Freeze that he can criticise whoever he deems fit, but he cannot insult.

Reacting further, Apostle Suleman also recalled that Daddy Freeze had insulted him too in the past, but he has forgiven him as instructed by the Bible.

“Just watched the video of Ifedayo Olarinde (Daddy Freeze) apologizing to Papa Oyedepo over the video he did 2 years ago.

“He equally did videos against me. I forgave because the Bible enjoins us to forgive. That’s what is expected of us.

“You can criticize but don’t insult,” Suleman wrote.

In his apology, Daddy Freeze, who appeared on a new video on Saturday, said the incident occurred two years ago but the video went viral recently.

Several clerics including Senior Pastor of Dunamis International Gospel Centre, Dr. Paul Enenche and the founder of Salvation Ministries, Pastor David Ibiyeomie, among others had condemned the broadcaster for insulting Oyedepo.

Enenche, who was among the first set of preachers to react to the verbal attack on their colleague, warned Daddy Freeze against attacking clerics in the country.

However, the broadcaster insisted he had no intention to disrespect Oyedepo.

He said: “My attention has been drawn to a video I released two years and seven months ago while addressing some pertinent issues that arose back then. I apologise for the delivery of my message and for any insult to Bishop David Oyedepo in that video as I didn’t in any way intend to dishonour, disrespect or disregard the person of the bishop”.