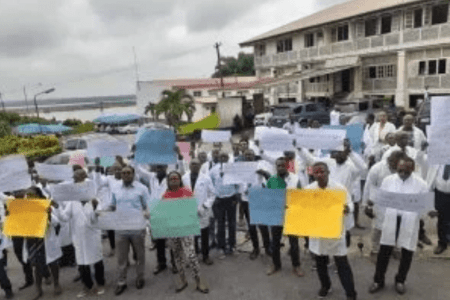 NAN reports that many essential places in the hospital, including the pharmacy, the medical records section and two of the main gates into the hospital were locked.

He said that the government has seemingly taken the patience of the striking workers for granted.

“We are on strike at the moment, and our members have gone home.

“The level of compliance is almost 98 per cent. The government must meet our demands.

“On September 30, 2017, there was an agreement with the Federal Government on some of these issues, most especially the adjustment of our salary structure.

“Three months later, that was April and May 2018, we had to go on strike again because the government failed to fulfil its part of the agreement,” he said.

According to him, JOHESU makes up over 94 per cent of workers in the government-owned hospitals.

“JOHESU is made up of over 94 per cent of workers in the hospitals, except doctors.

“Obviously, there’s nothing that can be done without this workforce, but unfortunately, the Federal Ministry of Health has been biased all along.

“We’ve tried our best. We have been patient enough, but it’s unfortunate that they are taking our patience for granted,” he said.