Home > Politics > PDP Is The Only Existing Party In Rivers State, Says Wike 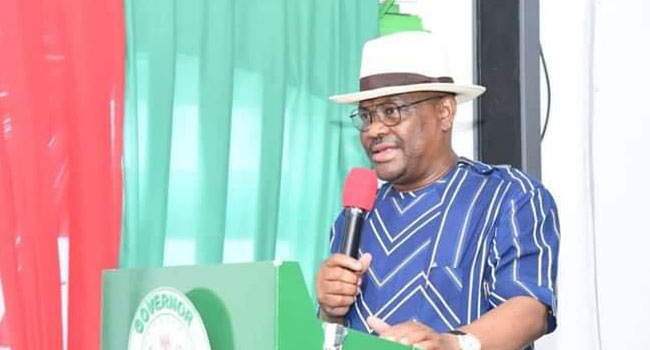 Rivers State Governor, Nyesom Ezenwo Wike has stated that the Peoples Democratic Party ( PDP) is the only existing political party in the state because of its commitment to the rapid development of the state.

Speaking during the defection of Former Commissioner of Education and Rivers APC Chieftain, Chief Allwell Onyesoh with thousands of his supporters at the PDP Secretariat in Port Harcourt on Friday, Governor Wike said that Rivers people are happy with the performance of the PDP over the years.

He said: “There is no other party in Rivers State. PDP is the only party as far as Rivers State is concerned.

“Except people who do not see and those who tell lies in this state, the only party that means well for Rivers State is the PDP.”

Governor Wike said that the performance of the Rivers State PDP is beyond mere propaganda.

“This is the only party that keeps its promises. When we say a thing, we go all out to carry it out on behalf of the people,” he said.

He expressed happiness that Rivers leaders are returning to the PDP to promote the interest of the state.

Governor Wike said that the PDP returnees will enjoy equal opportunities with older members of the party.

He said: “Everybody has equal rights. Luckily congresses will soon start and everyone will participate. The new entrants will fill feel at home. The more the merrier.”

In his remarks, Former Commissioner of Education and Rivers APC Chieftain, Chief Allwell Onyesoh said his movement is not defection, but a homecoming.

He said: “We came back to our house. We went on a journey. We have gone, we have seen and we have come back. “

The Former Commissioner described his defection as a massive home-coming with a cross-section of the APC Membership from different wards of Etche.

“We make bold to come back to the House that rightly belongs to us. I thank those who did not leave as they stayed home to keep the house in order,” he said.

Receiving Chief Allwell Onyesoh into the PDP, Rivers State PDP Chairman, Bro Felix Obuah urged them never to return to the APC that has disappointed the Nation. He said that the PDP symbolises development as shown in Rivers State.

Coronavirus: What We Know And What We Don’t