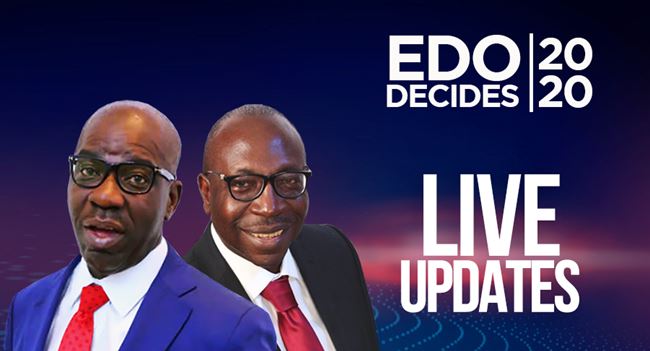 After months of rigorous campaigns in the 192 wards across the state, after the name-callings, after the accusations and counter accusations and after the mudslinging; finally, the die is cast, the needle of the countdown clock is on the zero hour. No hiding place for the major gladiators. It is judgement day for the duo of Governor Godwin Obaseki and Pastor Osagie Ize-Iyamu.

When the National Independent Electoral Commission, INEC, announced the time table for this election some months ago, it was like forever, that will never come. Alas! How time flies! The zero hour is finally here.

The two major gladiators in the election, candidate of the PDP, Governor Godwin Obaseki and Pastor Osagie Ize-Iyamu of the APC are not particularly new in the battle field of the state. They fought each other four years ago in the same arena. Then, Obaseki was candidate of the APC, while Ize-Iyamu was of the PDP. This time around, however, they switched positions.

Events that led to their swapping positions were both intriguing and interesting. Following announcement of the time table for the election, the PDP, like other parties hoping to field candidates began shopping for credible and sellable candidate. Several aspirants indicated interest, but surprisingly, the most likely of them, Ize-lyamu, was reluctant to commit himself. It was gathered that he decided to wait till he would be sure of getting the ticket before making any commitment.

While the waiting game continued, the national leader of the APC, Asiwaju Bola Tinubu revealed his ambition to run for the presidency come 2023, and he would need grassroots politicians in all the state to drive his ambition. That was where Pastor Osagie Ize-Iyamu came in. Of course, Ize-lyamu is not an alien to the Asiwaju, having served as Comrade Adams Oshiomhole’s campaign director before. It took no time before his choice was accepted by Tinubu, who named him director of his campaign organization (South-South).

That was why Ize-lyamu dumped the PDP for the APC, and was accepted by all, including governor Obaseki, based on the mutual understanding they had that he was coming to mobilise for the national leader. But, being the smart politician who had been looking for every means to actualize his age-long dream of being governor of the state, it was gathered that Ize-lyamu told Tinubu that he would serve him better if he is elected governor of the state. Tinubu wasted no time in asking the national chairman of the party, Adams Oshiomhole, to deliver him by all means. That was the beginning of the crisis that led to the dumping of APC for the PDP by Governor Obaseki.

Today, the two of them are now engaged in supremacy battle, the battle for the control of the state.

Now that the Judgement day has arrived, the fate of Obaseki and Ize-lyamu or anyone else among the 14 candidates contesting the election no more lies in their control. It now depends on the electorate.

While one expect up to 50 per cent of this figure to come out to vote to elect the governor of their choice, the fact however remains that these are the people who will determine the fate of these gladiators.

These two rival political parties have for many years have their respective dominance in certain sections of the state. While votes from Edo South has always determined who becomes governor, Edo Central has predominantly been PDP. It is their party, it is in their blood, it is their religion. So, come rain, come shine, PDP will always win at the central.

This time, however, voting pattern in the Edo South and North still remain the main decider. Both Obaseki and Ize-Iyamu are both from the Orhiomwon Local Government Area. In fact, they are cousins. Even though it could be safe to say that Ize-Iyamu is the grassroots politician, far ahead of Obaseki, no one in his right senses will completely ruled out the element of surprise that could spring up in favour of Obaseki. Anything could happen.

Analysts are of the opinion that votes in Edo North would largely go in favour of the APC. They are however quick to say that the victory of the party in the state would not be as total as it used to be, when the major gladiators were in the same party. This is because of the influence and popularity of the Deputy governorship candidate of the PDP, Philip Shaibu. It is expected that votes from the region would be shared in the ratio of between 60 to 40 in favour of APC, or 70 to 30 at its worst instance.

Votes from the Owan axis of Edo North could also be in favour of the APC, if permutations by pundits are any to go by. But that largely permutations might not be the final outcome of the election.

Whatever the case, it is just a matter of hours, and it would be over, because, the die is cast, the day of judgement has arrived for Obaseki of the PDP and Ize-lyamu of the APC. And there is no hiding place for any of them. One of them must emerge governor of the State.