New Naira notes: CBN has my back – Buhari  

Buhari, according to a statement issued yesterday by his spokesman, Mallam Garba Shehu, said the CBN’s decision had his support.

What Buhari said: Speaking in an Hausa language radio interview with journalists, Buhari said reasons given by the CBN for the change of banknotes convinced him that the economy stood to benefit in terms of reduction in inflation, currency counterfeiting, and excess cash in circulation.

The president said he did not consider the three months period announced for the change to the new notes as short.

“People with illicit money buried under the soil will have a challenge with this, but workers, businesses with legitimate incomes will face no difficulties at all,”

the statement quoted Buhari as saying. 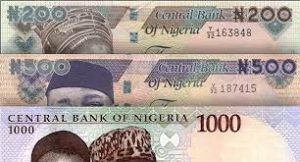 What happened: In what has been described as a move to tackle vote-buying and control the amount of money in circulation, the CBN announced the plan to redesign the N200, N500, and N1,000 bills last week.

CBN Governor, Mr. Godwin Emefiele, who disclosed the apex bank’s decision to redesign the banknotes at a media briefing in Abuja, said the change was sequel to an approval by Buhari.

Emefiele said circulation of the new banknotes would commence on December 15. He said the development was also aimed at checking the increasing ease and risk of currency counterfeiting evidenced by several security reports, and the increased risk to financial stability as well as the worsening shortage of clean and fit currency, with the attendant image problem for the central bank.

Emefiele said there was significant hoarding of naira notes by members of the public, with statistics showing that over 80 per cent of the currency in circulation were outside the vaults of the commercial banks. He said as of September 2022, a total of N3.2 trillion was in circulation, of which N2.73 trillion was outside the vaults of the banks, describing the development as unacceptable.

Tags #Who Are The Richest Women In Africa? Find Out Here
Previous