Home > Uncategorized > Neymar gets a two-match ban, his claim of racial abuse to be investigated 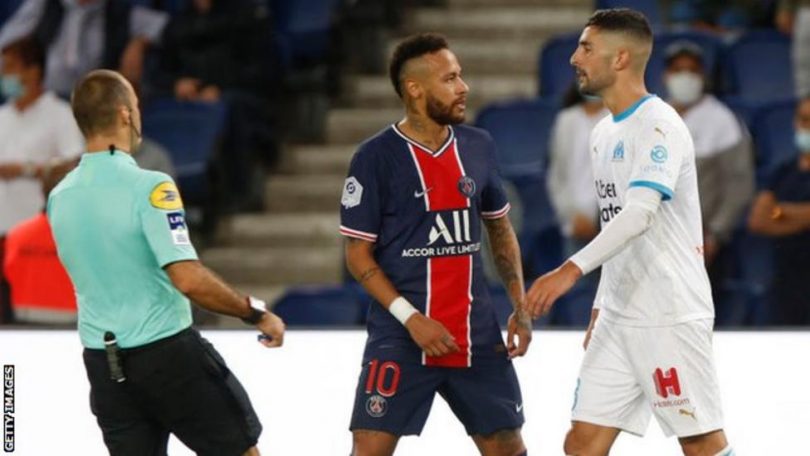 Neymar gets a two-match ban, his claim of racial abuse to be investigated

Paris Saint-Germain forward, Neymar has been handed a two-match ban after he was shown a red card in his side’s Ligue 1 game against rivals Marseille.

The Brazilian was one of the five players that were sent of in Sunday game that saw the Paris club lose 1-0 in the matchday two fixture, having also lost their opener.

Following a brawl towards the end of the game at the Parc des Prince, A VAR review showed Neymar punched the back of Marseille defender Alvaro Gonzalez.

But Neymar has since claimed that his opponent racially abused him, and urged the authorities to use VAR to investigate. Gonzalez has however denied Neymar’s claim.

The Ligue de Football Professionnel (LFP), the governing body of professional French football, has confirmed it will investigate Neymar’s accusation.

Meanwhile, the other four players sent off have also received bans – with PSG defender Layvin Kurzawa suspended for six matches.

His team-mate Leandro Paredes has been banned for two games – while for Marseille, Jordan Amavi has received a three-match suspension and Dario Benedetto must sit out one game.

Neymar’s suspension means he missed Paris Saint-Germain’s clash with Metz on Wednesday, and will also miss their next match.

Julian Draxler’s injury-time winner ended their losing start to the Ligue 1 season against Metz, as the champions won 1-0.