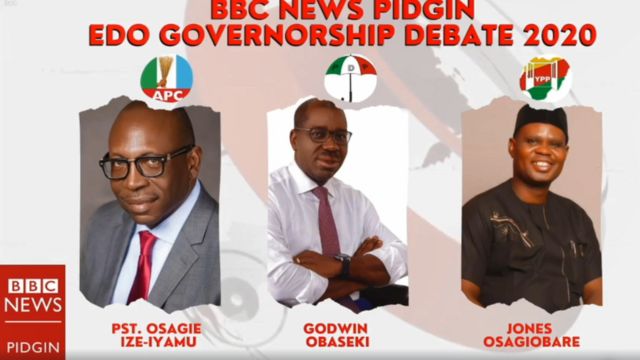 As the people of Edo State gear up for the governorship elections, some of the candidates will be sharing their plans for the state, should they win the elections coming up on September 19.

The aspirants who will be participating in the debate are: Iboi Emmanuel of the Action Democratic Party (ADP), Bishop Akhalamhe for the Zenith Labour Party (ZLP), Amb Jones Osajiobare, for the Young Progressive Party (YPP), Agol Ebun Tracy for the New Nigeria Peoples Party (NNPC) and Igbineweka Osamuede, the candidate of the Allied Peoples’ Movement (APM).

– At 36, he is the youngest candidate in the election.

– He studied Computer Science at the University of Benin

– His mum is a trader in one of the markets in Benin City.

– He says he has worked in the APC Presidential Campaign Office under the present Minister of Works and Housing, Babatunde Fashola.

– He has asked Obaseki and Ize-Iyamu to step down.

– He contested in the 2016 governorship election under the People for Democratic Change (PDC).

– He is an accountant by training.

– He has said he will resuscitate Edo Line Transport Service

– He is a clergyman, politician and businessman.

– He said he is there to win and not complete the numbers.

– Wants to capitalize on the failures of the All Progressives Congress (APC) and the People’s Democratic Party (PDP).

– Ready to build a Technology Village; tackle human trafficking via job creation and mechanisation of agriculture.

-She is a trader and resides in Benin City

-He is 42 years old, was born and resides in Benin City.

-Osamuede graduated from the Ambrose Alli University in 2002.

– He is a businessman and has been self-employed since 2003 till date.