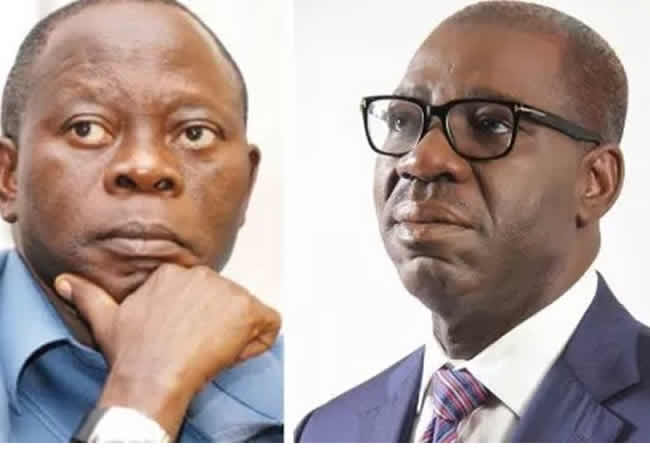 Governor Godwin Obaseki has attacked his predecessor, Adams Oshiomhole, saying he borrowed recklessly when he was in office, plunging the state into serious debt to the tune of N120 billion.

Obaseki spoke at the Channels TV’s Governorship Debate on Sunday.

On the economic agenda, Obaseki said his predecessor, Oshiomhole borrowed recklessly that the federal government had to restructure outstanding obligations to Edo State to the tune of N30 billion.

“My predecessor in office borrowed recklessly and the Federal Government had to restructure all the debts had been taken before I came into office.

“The Federal Government restructured outstanding obligations to Edo State to the tune of almost N30 billion and that is what was responsible for adding to the debt stock not the borrowings from this administration,” he said.

The governor said Edo’s debt moved to N120 billion and that he had been able to reduce the debt stock.

But the All Progressives Congress, APC, governorship candidate, Pastor Osagie Ize-Iyamu countered Obaseki, saying that it is scandalous for him to attribute the huge debt to Oshiomhole were he was the Chief Economic Adviser.

“It is scandalous to attribute the huge debt to a predecessor that you were the Chief Economic Adviser to. Sometimes you seem to forget the role you played in the past government.

“The oil-palm project, he collected N69 billion from the central bank and the money has been shared to cronies,” he said.