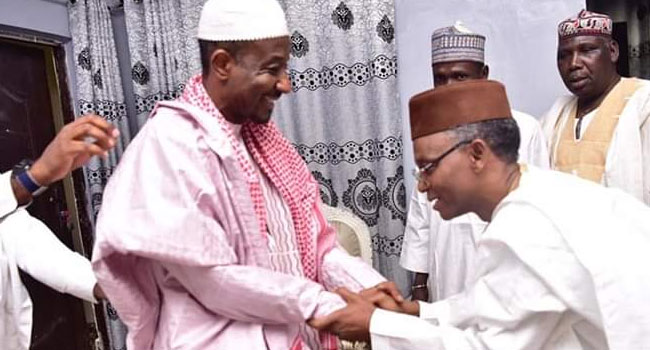 The Kaduna State Governor, Nasiru El-Rufai, has met with dethroned Emir of Kano, Muhammad Sanusi at Awe in Nasarawa State.

Due to heavy security presence journalists were only allowed to stay  200 metres away from the place.

Photos were however shared by Governor El-Rufai’s official Twitter handle.

Earlier in the day, a Federal High Court sitting in Abuja granted an interim order releasing Sanusi from detention.

Justice Anwuli Chikere granted the order in line with the prayers on the exparte motion filed on behalf of the deposed Emir by Mr Lateef Fagbemi SAN.

The judge noted that the order for the release of the deposed monarch should be served on the respondents to the application.

He, therefore, fixed March 26, 2020, for the hearing of the main suit challenging his detention.

The former Emir had on Thursday approached the court seeking an interim order of the court directing his immediate release from detention.